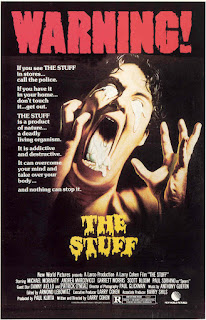 Larry Cohen’s THE STUFF is a horror satire that somehow manages to be even more obvious than DAWN OF THE DEAD. Kim Newman once wrote that Cohen “still hasn’t received the critical attention he deserves” because he “makes monster movies”. Newman wrote that line in 1988 in the first edition of his wonderful Nightmare Movies. I’m still waiting for him to receive the critical attention he deserves. Cohen has a sharp, satiric wit capable of the kind of slight exaggeration necessary to make his bigger points work in a genre whose fans are more receptive to hyperbole than to subtle suggestion. Throughout his early works, we can see Cohen’s socially critical eye at work, but his work here seems to be more prophetic than usual. In a society where 36 percent of adults and 17 percent children are obese, what we are eating is killing us.

In THE STUFF, Cohen takes that basic idea and ramps it up to delirious levels. A popular snack treat is on fire all across the nation. People can’t bring themselves to stop eating it. A former FBI agent is brought in by the highly concerned CEOs of ice cream manufacturing companies and he launches an investigation, including visiting a FDA member who basically says that anything that couldn’t possibly cause harm (such as a snack treat) doesn’t deserve the kind of attention something that has health implications deserves. Except that snack treats DO have health implications and The Stuff of THE STUFF most definitely has health implications.

From calling this tasty, dangerous treat “The Stuff”, an obvious reference to what hard drugs were called at the time, to the commercial tagline attached to the product “Enough is Never Enough”, the very philosophical underpinning of the 1980s, Cohen’s re-imagining of our nation’s food obsession as a Pod People science fiction/horror/comedy never stops for breath and never stops being incredibly entertaining. Even though the special effects haven’t aged well (some of the process shots were bad enough in 1985; they look absolutely dreadful now), the story the film tells is much more salient today and is just as insightful as ever. Just like DAWN OF THE DEAD, another film whose satirical bent is every bit as on the mark now as it was then, the narrative implications in THE STUFF (in a way) ensures the film doesn’t age. Sure, the effects are wonky and the fashion is terrible, but what is written between the lines is always what matters most in a Cohen film. Here, he is spot on with his observations.

THE STUFF is one of my favorite Cohen films, easily standing next to IT’S ALIVE, Q, GOD TOLD ME TO and BONE. It is probably the most fun of all those films. As an amalgamate of popular science fiction films of old (there’s all kinds of nods to films like INVASION OF THE BODY SNATCHERS, THE BLOB and INVADERS FROM MARS), it is incredibly fun. As a straight horror film, it definitely fails. But as an elbow to the face of the Reagan era mass consumerism of the 1980s, it’s damn near perfect.

- October 13, 2016
Email ThisBlogThis!Share to TwitterShare to FacebookShare to Pinterest
Labels: The Stuff